The Habit of mutual benefit.

Habit 4: Think Win-Win is not a technique; it's a total philosophy and one of the six paradigms of human interaction. The other paradigms are: Win/Lose, Lose/Win, Win, and Win/Win or No Deal.

Win-Win is a frame of mind and heart that constantly seeks mutual benefit in all human interactions. It's not your way or my way, it's a better way, a higher way.

"When one side benefits more than the other, that's a win-lose situation. To the winner it might look like success for a while, but in the long run, it breeds resentment and distrust." - Dr. Stephen R. Covey

Which paradigm is best?

Most situations are part of an interdependent reality, and then Win/Win is the only viable alternative of the six paradigms of human interaction. Think of Win/Win as the bait of interpersonal leadership. Character is the foundation of Win/Win. There are three character traits essential to this paradigm:

"In the long run, if it isn't a win for both of us, we both lose. That's why win-win is the only real alternative in interdependent realities." - Dr. Stephen R. Covey

Many people think in terms of either/or: either you're nice or you're tough. Win-win requires that you be both. It is a balancing act between courage and consideration.

Watch: Green and Clean, from FranklinCovey’s All Access Pass®.

Keep every team member engaged with these 8 tips to boost collaboration and morale - powered by The 7 Habits of Highly Effective People®. 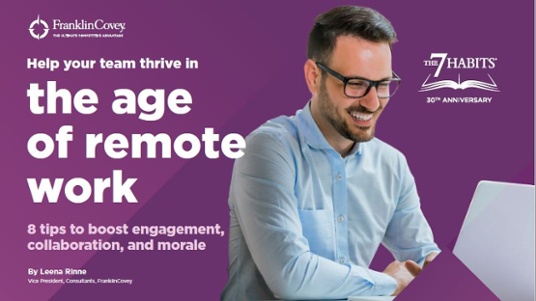 Not taking action around the things you can control/influence, but instead, spending your time complaining about or trying to influence things you can’t...

As a manager, you’re supposed to be in charge, but of what? Shifting company strategy, markets changing with the wind, unclear priorities from your manager,...

When you work hard to build your career, work/life balance can feel impossible. But not taking time to recharge will only hurt your efforts.